Whip up a batch of our homemade vanilla pudding, just like Mom used to make. 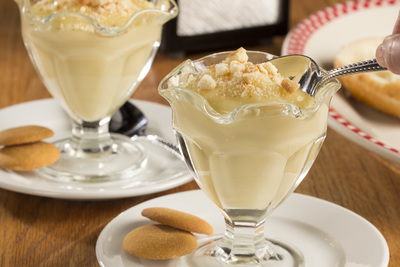 This thick, traditional pudding always puts a smile on our face 'cause it reminds us of Mom's old-fashioned vanilla pudding. Yup, there's nothing like a little Classic Vanilla Pudding to bring back good childhood memories.

This is one of those desserts you can serve to your chocolate-loving family members to prove to them that vanilla is a highly underrated flavor. There's something about the mellow, sweet flavor of homemade vanilla pudding that is sure to charm everyone. We'd love to see this dessert on the table at Sunday dinner or at a potluck. But the great thing about this recipe is that it's also easy enough to make during the week. Just be sure to cook it a day in advance, because it takes a few hours to set up. We promise it will be worth the wait!

Pudding vs. Custard: What's the Difference?

Many people think that pudding and custard are the same thing. This isn't true! It's also common to just not know the differences between these two creamy desserts.

The short answer to "what's the difference between pudding and custard?" is that pudding uses starch, such as flour or cornstarch, as a thickener. Custard relies on eggs as the thickening agent.

That might sound like a boring distinction, but it leads to a fun (and delicious) difference in flavor and texture! Custard is usually thicker and flatter than pudding, with a richer and more luxurious texture. Think of pudding like custard's carefree cousin, with a light and creamy texture that is every bit as charming and delectable.

These desserts are also often made using different techniques. Pudding is usually cooked on the stove, while custard is often baked in a water bath. Neither of these sweet treats are quick to make, but they are both definitely worth the extra time!

Can I use Almond milk to make this pudding?

Yes, almond milk can replace whole milk in this recipe. :)

Hello! Yes, this pudding recipe can be made without eggs. Test Kitchen recommends using 1 1/2 tsps vanilla extract to boost flavor. The texture might not be as rich and creamy, but it will work. Hope this helps :)

Allergic to eggs. Can I get a good outcome by illuminating eggs?

Perfect! And quick and easy. I've been searching for the vanilla pudding recipe for years, this is it. Only thing, it's really sweet. Next time I'll reduce the sugar some. But other than that, perfection.

Reminds me of mom's! Have been using this in my Banana Pudding instead of the packaged for years.